2023 is going to be a good year. The FIA World Endurance Championship and North American IMSA WeatherTech SportsCar Championship will have a new class open to Hypercars with a hybrid powertrain.

Porsche has announced that it is working towards having a racing prototype for the 2023 season as has Audi, Honda and most recently the team that every racing Championship wants – Ferrari.

Following a period of study and analysis, Ferrari has kicked off the development of the new LMH car to include in recent weeks the design and simulation phases.

Fifty years after its last official participation in the premier class of the World Sports Car Championship in 1973, Ferrari will take to the track in the Hypercar class of the FIA World Endurance Championship, which it proactively helped to establish.

Ferrari President John Elkann commented: “In over 70 years of racing, on tracks all over the world, we led our closed-wheel cars to victory by exploring cutting-edge technological solutions: innovations that arise from the track and make every road car produced in Maranello extraordinary. With the new Le Mans Hypercar programme, Ferrari once again asserts its sporting commitment and determination to be a protagonist in the major global motorsport events”.

It will be fantastic to see these might manufacturers battling it out for an overall win at Le Mans again. 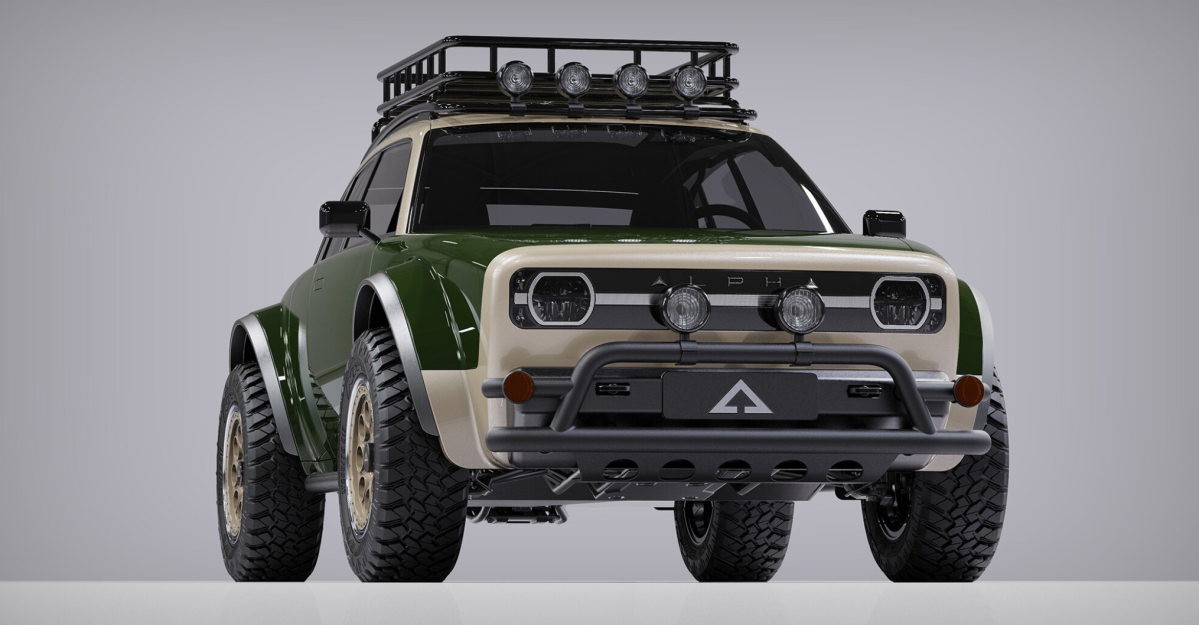 Alpha Motor Corporation has revealed its newest electric offering, in the shape of a crossover utility vehicle (CUV) called the JAX. It shares a platform with its sibling the Alpha ACE.

To really push its credentials the name JAX stands for Junior All-Terrain Crossover, positioning it as a fun, utility vehicle with enough space for four passengers with a clean powertrain. The adventure seeking electric vehicle was unveiled in a deep green finish inspired by nature surrounding the scenic Redwood Highway in Northern California. It is offered as four-wheel drive or front-wheel drive system with a towing capability of 830kg.

It will be fitted with a 75 kWh Lithium-ion battery providing an estimated 250 miles of range whilst capable of silently accelerating to 60mph in 6.5 seconds. Nothing to blow your socks off especially with the likes of Tesla, Rivian and Porsche all offering better specs all round.

Inside, it becomes more evident where styling cues were lifted from – there is a central landscape display, a driver-centric digital speedometer and then very little else to clutter the environment. A lot of the internal components have been crafted to be easily replaceable.

Alpha is now taking deposits for the JAX and the ACE, but the company is keen to show its commitment to move humanity with innovations in electric vehicle modularity, customisation flexibility and practicality.

Car detailing has exploded in recent years, with countless companies sprouting up showing that cars can look even better than when they left the factory. There are videos showing orange-peel paint correction, removing swirls and bringing paint back to life.

All of these methods take time to master and cost hundreds, if not thousands worth of equipment, mainly the orbital polisher. But what if you want to spruce up your car’s paint without spending large amounts of money?

AutoBuff, the new product from Pumpit, a company focussed on building automotive accessories is an orbital polisher than allows the user to compound, polish and finish the paintwork of your car.

Its cordless design means it weighs a lot less than professional polishing tools. It has a round handle for a convenient and comfortable grip to use at any angle. AutoBuff allows you to select the speed by pressing the button on the top of the machine. It has a speed range of 3,400 to a 3,800 OPM. It comes with three pads of varying coarseness making it ideal for buffers of all experience levels.

Fitted with a 4,000mAh battery, it will provide up to 45 mins worth of polishing power and can be charged via USB-C meaning it can be topped up in the car whilst you admire your handy work.

Due to be shipped out to customers in May 2021, the AutoBuff received 100% of the backing needed within the first hour of its launch, but there is still time to get hold of one.

Tesla has recently announced its latest update to the Model S – now with triple motors, some mind-blowing specs and a whole a new interior. The current range is now filled with the Long Range edition with dual motors and all-wheel drive which has a 412 mile range and now the triple motor Plaid and Plaid + with 390 and over 520 miles respectively.

The new Plaid and Plaid + versions come with a new top speed of 200mph, acceleration to 60mph in 1.99 seconds with a peak power output of 1,020hp and 1,100+hp. Tesla has always had some insane numbers and it keeps pushing for mainstream manufacturers to catch up.

It has recently updated its interior too, swapping a normal round steering wheel to a yoke style steering wheel and removing all stalks including the gear stalks. The Model S will now use Ai to determine which gear you need. The indicators, horn and lights are now buttons on the steering wheel.

Another major change to the interior is the central screen. It has been changed from a vertical orientation to a 17-inch horizontal one, as well as a 12-inch driver display. The ventilation buttons have also been moved to the screen, meaning there are barely any physical buttons. There is also a new 22-speaker, 960-watt audio system with active noise canceling that offers the best listening experience at home or on the road.

The car now has Multi-device Bluetooth, wireless and USB-C fast charging for every passenger with enough power for your laptop provide even more connectivity and convenience. At the back, there is a secondary screen to allow gaming from any seat.

The battery pack now has a new module and pack thermal architecture allows faster charging and gives you more power and endurance in all conditions. And as per most Teslas, the cars all have Auto Pilot, Auto Lane change, Autopark and Summon. 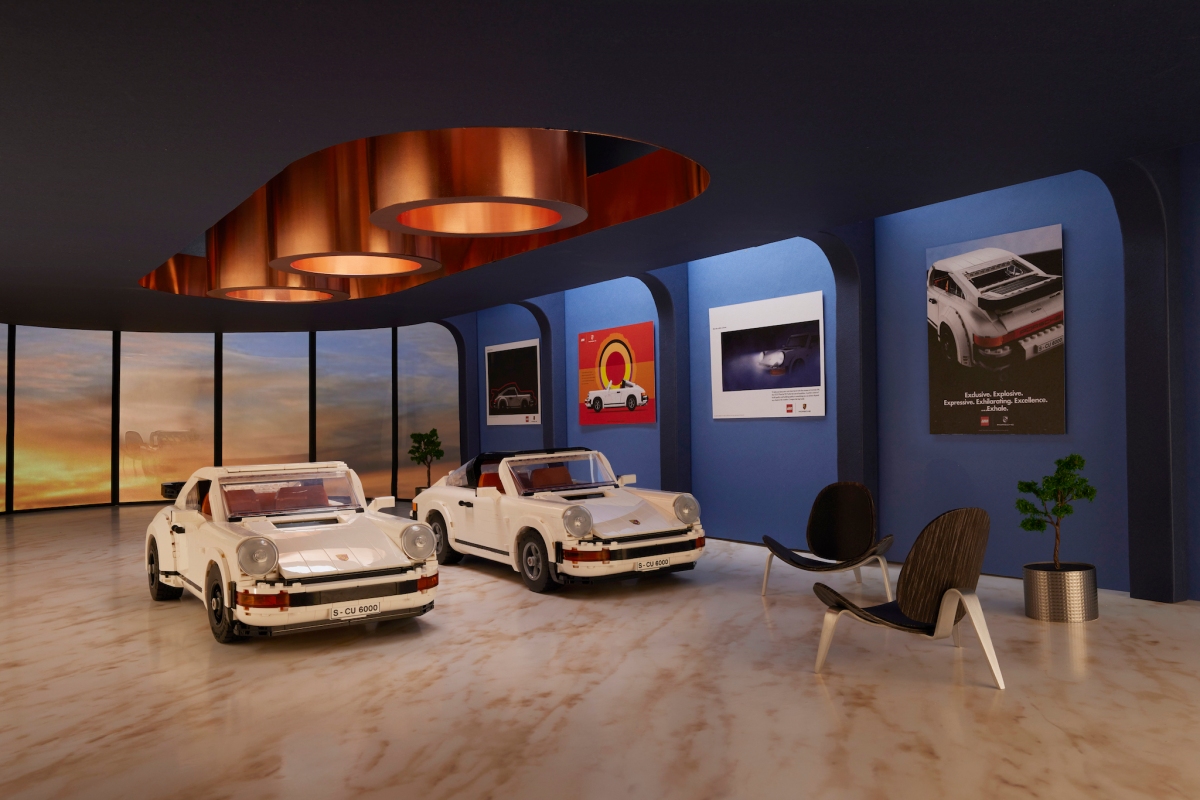 Lego and Porsche has recently unveiled its latest creation – a G-series 911 which is a two-in-one LEGO Porsche 911 Turbo and 911 Targa set that brings together two icons from the 1970s and 80s.

Both forms of the 911 feature all the hallmarks of their namesakes, from the aerodynamic shoulder line to angled headlamps and sculpted bonnet with Porsche badge and rear-mounted flat six ‘boxer’ engine.

The detail isn’t only on the exterior, the seats and dashboard are finished in dark orange and nougat, based on the classic 911 upholstery. Further interior details include a handbrake, gearshift and functional steering, while the front seats also tilt forward for access to the rear bench seats.

The 911 Turbo sports distinctive Turbo badging, a wide rear axle, turbocharger and intercooler whilst its look is completed with an integrated rear spoiler.The Targa on the other hand, has a fully-removable roof that can be stowed under the front bonnet, whilst the iconic Targa bar and wraparound window completes the look.

LEGO is also offering the first buyers the chance to receive a limited-edition LEGO Porsche owners pack with their purchase. The pack contains a certificate of ownership, an official LEGO Porsche card wallet and a set of four unique art prints based on contemporary Porsche 911 adverts, all presented in a smart collector’s wallet. 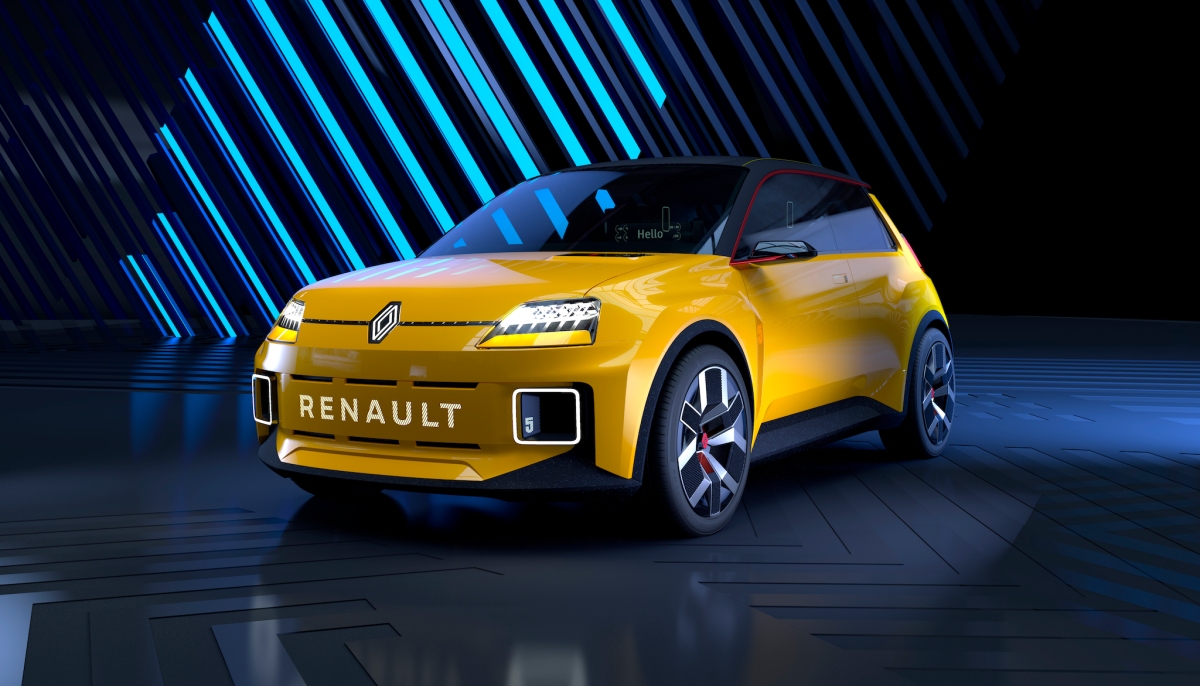 As part of Renault’s new five year strategy, the company will transition to a more sustainable and cleaner brand by embracing electrified and hydrogen solutions and offering the greenest fleet of cars by 2025.

Part of that fleet is the rebirth of the cult Renault 5 model. The prototype is said to reconnect with the past, drawing inspiration of the glorious times to create a car that will offer a modern approach to the electric car with a nod to the past.

Let’s start with the size – it is a compact city car with strong features, think yellow headlights for one. The R5 is immediately recognisable, but thanks to a modern treatment of lines and flush surfaces with futuristic detailing, the result is in keeping with current times. Additionally, the styling elements taken from the original design hide some of the more modern features, for example: the bonnet air intake hides the charging hatch, the rear lights include aero flaps and the fog lamps in the bumper are daytime running lights. There is even a nod to the original ‘5’ on the side vent, the wheels and rear logo.

“The design of the Renault 5 Prototype is based on the R5, a cult model of our heritage. This prototype simply embodies modernity, a vehicle relevant to its time: urban, electric, attractive.”
Gilles Vidal, Renault Design Director 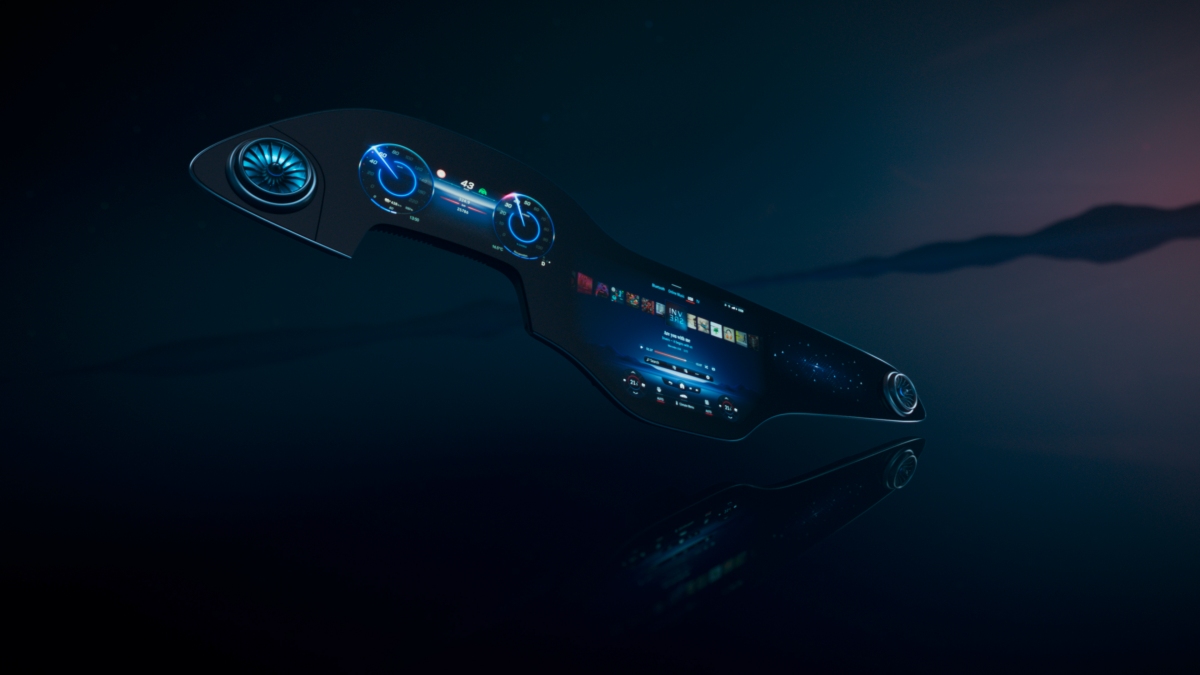 Ahead of the launch of the EQS electric saloon, Mercedes has unveiled the MBUX Hyperscreen – a massive 55-inch screen that will sit the full length of the dashboard.

“The MBUX Hyperscreen is both the brain and nervous system of the car”, says Sajjad Khan, Member of the Board of Management of Mercedes-Benz AG and CTO. “The MBUX Hyperscreen continually gets to know the customer better and delivers a tailored, personalised infotainment and operating offering before the occupant even has to click or scroll anywhere.”

The Hyperscreen isn’t one screen but several displays which appear to blend seamlessly, resulting in an impressive, curved screen band. Analogue air vents are integrated into this large digital surface to connect the digital and physical world. The screens in the central and passenger displays are OLED to provide a brilliant images when a passenger is in the car. If not, the passenger screen can be used a decorative element.

There are a total of 12 actuators beneath the touchscreen for haptic feedback during operation. If the finger touches certain points there, they trigger a tangible vibration in the cover plate. The Hyperscreen is also fitted with 8 CPU cores, 24-gigabyte RAM and 46.4 GB per second RAM memory bandwidth are some of the MBUX technical specifications.

To avoid drivers spending time looking at screens rather than the road, Mercedes has implemented what it calls zero layer, the user does not have to scroll through submenus or give voice commands. The most important applications are always offered in a situational and contextual way at the top level in view. In this way, numerous operating steps are taken away from the EQS driver.

As well as zero layer, Mercedes is implementing artificial intelligence where it will learn a user’s habits over time and can then suggest them on the drive – like the hot stone massage when it is cold, or if you call a friend every Tuesday.