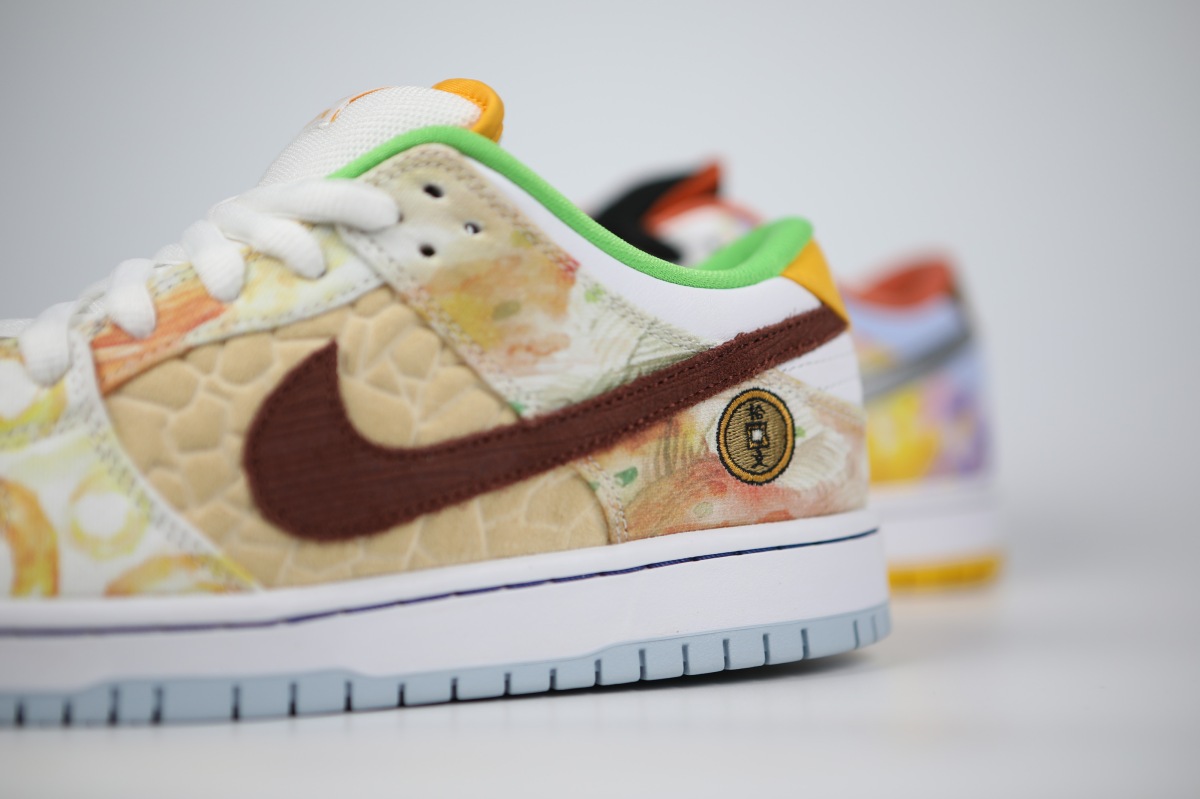 The pair of shoes has 22 specific elements that focus on the food culture from both heel tabs  featuring Chinese calligraphy for “food” in black and white thread and four colors of laces are inspired by four essential seasonings in Chinese cuisine: green (shallots), yellow (ginger), white (garlic) and black (black pepper). That’s what is on both shoes, the other 20 elements are featured on either the left or the right.

Left shoe
The left shoe uses a lighter beige for three flour-based dishes. The suede toebox mimics the color and texture of green bean soup (Douzhi) from Beijing. Donut (Jiaoquan) patterns on the forefoot pair with the green bean soup.

The left insole resembles a blue sky, inspired by traditional Chinese slang implying that people treat food as their heaven. The blue lining of the left midsole mimics the blue-and-white of fine porcelain bowls.

Right shoe
The right shoe features hotter colors to represent different heats, from spicy to sweet. The metallic color on the right toebox is pulled from Chengdu hotpots in which dishes are cooked.

Boiling chili-oil treatments bubble around the toebox. Ostrich leather on the lateral side is inspired by the crispy roasted goose skin that’s famous in Guangzhou. The silver Swoosh resembles the metal hook used to hang the roast goose. The flame and Lychee wood used to roast the goose appears in a watercolor pattern around the eyelets.

Shaved ice and taro balls — a common Taipei dessert — can be found on the heel counter. The insole paints the scene of a bench terrace, a landscaping method used to grow rice paddies.

This food inspired pair will be launching on the Nike SNKRS app on Jan 13th and if you can’t wait till then, maybe go sample some of the great food that is represented on each shoe to really immerse yourself in Chinese food culture.