Say hello to the most powerful rear-engined V8 convertible. The 488 Spider. Not long ago we were swooning over the curves of its fixed head sibling,  the 488 GTB, which was the first rear-engined turbo-charged V8 since the F40.

Ferrari has given us a glimpse of what this car will look like with some serious sets of numbers. Powered by the same engine as the GTB,a 3902cc turbocharged V8 pushing 670hp and 760Nm helping this stallion gallop to 62mph in 3 seconds flat and to 124mph in a little under 9 seconds.  Being turbo-charged, the Luddites will moan about turbo lag and why N/A engines perform and sound better. Ferrari say that turbo lag on this 488 Spider is only 0.8 seconds and the sound of the engine is ‘seductive but never invasive’. The other supercar with those kinds of numbers is the already sold out McLaren 675 Long-Tail with 675hp and 699Nm.

The 488 Spider is considered as the most aerodynamically efficient Ferrari Spider to date thanks to some complex aero which not only reduce drag but guarantee the best levels of downforce. Another number for you all. 14 seconds. That is the time it takes to let in the sunshine or cower away from the rain clouds.

Much like the 458 Spider, the 488 Spider has the second generation of Ferrari’s Slide Slip Angle Control system which will encourage you to push the car harder through corners resulting in a 12% quicker acceleration than its predecessor out of corners.

Ferrari models do look good in other colours than Red and these pictures show just that. Blu Corsa is the name and it will be readily available on the 488 Spider. No prices have been announced just yet, but expect it to compete with the McLaren for price. 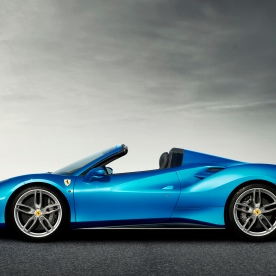 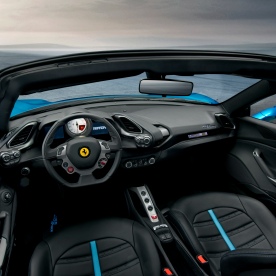 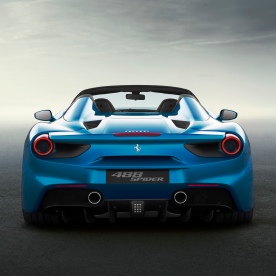